Mike Inglis practice explores the creative possibilities that exist between public art and outsider art. He enjoys making publically sited work that explores transitional spaces that “outsider art” often inhabits as well as bleeding these practices into work for more traditional gallery spaces. He is particularly interested in found materials and adhocist approaches to construction. The focus of his research engages in a direct dialogue with outsiders or isolated communities, their dogmas or doctrines becoming the core of shared dialogues. He is interested in exploring ideas that surround superstitions and belief systems in a wide variety of outputs from installations and films to drawing and printmaking.

More recently mike was lead artist on resonate | disseminate a project which developed a series of engagement strategies, interventions and exhibitions that took place on two project bases, Dr Grays Hospital in Elgin and Inverurie Hospital. It was Mikes role as lead artist to create and strategically lead a team through this 18 month project investigating the potential of the rural hospital to become community arts hubs, establishing a model of engagement and defining what is necessary for successful outcomes in this ambitious project. 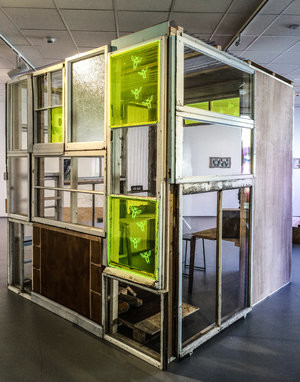