Fiona is an artist who works through the medium of ceramics. Work from The Angel's Share can be purchased or commissioned in particular colour ways. Commission information, samples, price list and commission lead times available on request.
Fiona's free standing ceramic and crystocal plinth assemblages, are named The Angel’s Share, an industry term for the portion of whisky lost in evaporation in the cask barrel. Here however, the phrase is a metaphor for the poetics of the temporal soul as described by Gaston Bachelard.
The assemblage’s composition, colour and rhythm are informed by Italian Renaissance painting; Duccio di Buoninsegna’s (d.1319), Maesta, in Siena and Giotto’s (d.1337), Padua, Scrovegni Chapel frescoes. Joseph Cornell's assemblages also have their place.
The assemblages' material process engages with modernism through the repetition of minimalist rectangles, visible process (press moulded clay, monoprinting, collagraphy) and the deconstruction of narrative into discrete components.
The soul is domestic. It likes a house, (the rectangles in Fiona's assemblages) and it daydreams in this cosy place. These daydreams share certain properties for the soul reflects on itself through form and image. The rectangle is terrestial and the circle is aerial. There is cosmic tension between the two. In Fiona's work these forms are present as themselves or embedded in motifs such as a shallow box, a recessed lair, a window, a beaker. Her ceramic rectangles and circles are repeated images of interiority locating the angel’s share, within the viewer who completes the work.
Fiona works in Ferindonald
See Fiona_Byrne-Sutton's exhibition, The Angel's Share, at the &andgallery, 17 Dundas Street, Edinburgh EH3 6QG, 12 May - 9 June 2018. Open Tues - Sat. Info@andgallery.co.uk

Fiona completed a postgraduate MA in Ceramics (with distinction) at Cardiff School of Art and Design (CSAD) in 2015, having completed a BA Hons in ceramics at Glasgow School of Art in 2008. She also has a BA Hons in Fine Art from Goldsmiths College of Art, London.
She was runner up, Aberystwyth International Ceramics 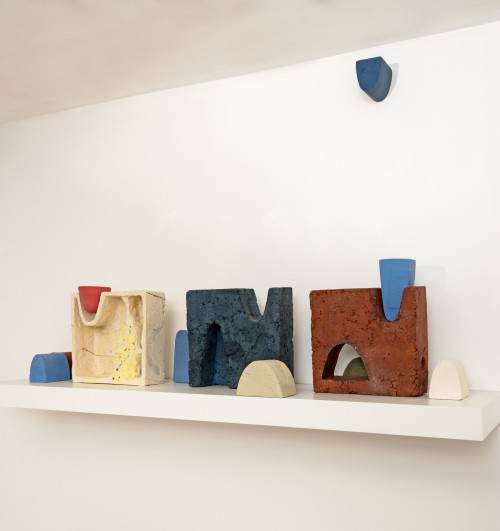