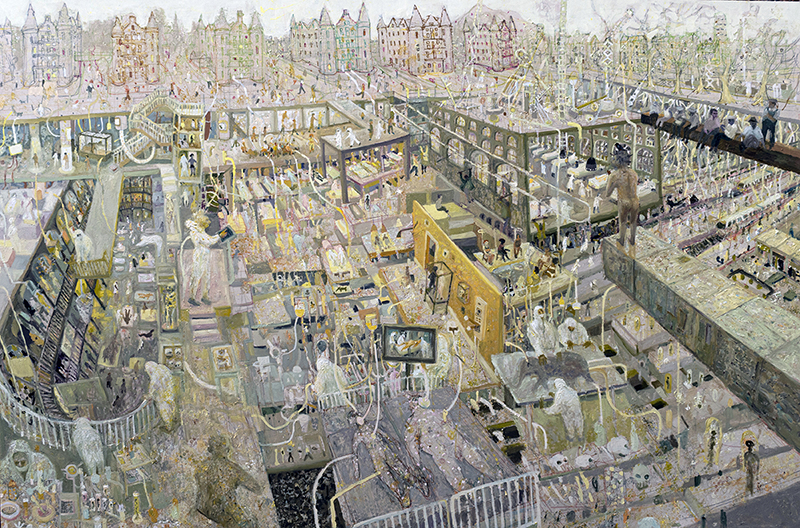 We are delighted to continue our Curated Member Showcase after a brief hiatus for the Annual Exhibition. Every month we will showcase three Visual Arts Scotland members, spotlighting their work & practice.

Mark Jones was director of the Victoria and Albert Museum and before that of the National Museum of Scotland. He is now the owner of Golden Hare Books in Stockbridge, patron of VAS and chair of the National Trust for Scotland, Hospitalfield and the Pilgrim Trust. He is working on books about the nineteenth century medallist William Wyon and the twentieth century painter Algernon Newton.

''Robbie Bushe uses the humblest and most humdrum of drawing instruments, wielded with manic energy to dig deep into imaginary worlds which are also maps of the collective unconscious. The resulting images are funny, disturbing and brilliant.''

"I have shown my narrative paintings throughout the UK since 1990. My work, inspired the characters and the places I have lived and worked, has won several national awards including most recently the inaugural W Gordon Smith painting prize at the Dovecot Galleries in Edinburgh.''

I am an award-winning narrative artist of national standing. Born in Liverpool in 1964, I graduated from Edinburgh College of Art in 1990. I have lectured at several institutes: Grays School of Art Aberdeen, University of Chichester, Kent Institute of Art and Design and Oxford Brookes University, Edinburgh College of Art and I now for the Centre for Open Learning at Edinburgh University. I am a past President of Visual Arts Scotland and am currently Secretary of the Royal Scottish Academy. In 2016 I was the innaugural winner of the W Gordon Smith Painting Prize.

My recent work straddles the use of research, daydreams, observation and pictorial reconstruction. My structural but free-flowing drawings, paintings and animations take as their starting point sprawling cities built on monumental panoramas – both improvised and real.

My most recent project, ‘NEONEANDERTHALS’, was a collaboration with Canadian-based anthropologist Dr Jeanne Cannizzo, culminated in an exhibition at the Royal Scottish Academy in 2019. It set out to make visual and playful use of scientific research into the extinction of the Neanderthal some 30,000 years ago – including their continuing role in society through the survival of their DNA in humans.

I tend to seek out painters who want to tell visual stories in ireverlant and playfuls ways; It changes continuously but currently I have been stealing unashamedly from Hernan Bass, Tal R, Makiko Kudo, Danny Fox, Dale Lewis, Juliet Gooden and Jules de Balincourt.

Get in early. Have two works on the go at any one time. Having a plan; a drawing, an image ready to go. Decide what bit of the painting I am going to do (and stick to it), spend an hour mixing colour ranges (and sticking to them) – then painting for three hours totally obsorbed. Clean up. Work out plan for next session and stick to it.

I have a solo show at Open Eye Gallery in April 2021 and my work can also be seen at RSA annual exhibtions. I am also working on a collaboration with ECA lecturer John Brown revisiting Edinburgh never built inner ring road planned in the 1960s. Not sure when and where this will come to fruition as yet.