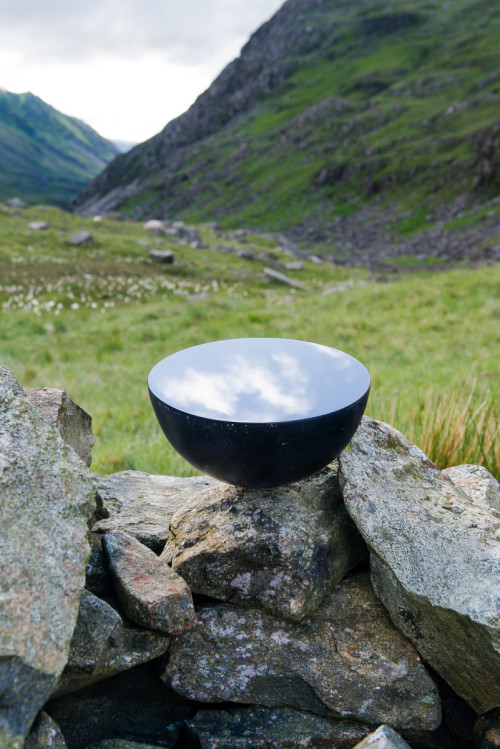 Immersive, participatory and environmental provocations form the basis of Calmus's practice which takes a multidisciplinary approach spanning fixed large scale light installations to month long nomadic social interventions. Interested in psychological and philosophical narratives, her practice is intentionally interdisciplinary; viewed as a series of experiments underpinned with explorations into interaction.

Calmus graduated from Duncan of Jordanstone (2014) in Art, Philosophy and Contemporary Practices, after which she moved to Edinburgh and began volunteering as a Hidden Door Festival team member, where she continues to contribute by developing the festivals content. Sarah is currently President of Visual Arts Scotland.

The second of Sarah's three choices is Inge Panneels

"Inge Panneels is an artist whose work spans different mediums, forms and disciplines but sumarises her practice in four words; place, making, glass and maps. Panneels work is often site specific, and project based. It includes a time based element, and a precision that underpins the explorations in glass, environmental works, and research led exploration. There is a scientific experimental feel to Paneels practice, imbued in the mediums of glassmaking that is deftly explored, since creating her studio in 1998 and geographical projects, positioning place and space in a way that invokes ideas of creative expedition. This experimental underpinning is also highly present in Panneels enquiry of idea, through to medium. It strikes the observer that the form of Panneels work is fluid, and not secondary, but often sits alongside complementary constants; the conceptual explorations that unfurl in the approach of enquiry. A vast interdisciplinary portfolio, an impressive handling of complex materials and subject matter, Paneels work is dense with exploration, highly skilled in precision and endlessly fascinating. An alchemy of interdisciplinary enquiry."

Originally from Belgium, I came to the UK to do one ‘gap’ year to learn English whilst undertaking a BTEC Diploma in Foundation Studies in Art and Design at Brighton College of Technology. An introductory course into glass making and a timely exhibition at the Crafts Council in London, got me intrigued enough to apply to Edinburgh College of Art to study glass at undergraduate level. I figured, Brighton – Edinburgh, both were away from home but at the time not quite realising the geographical and cultural distance between them! I specialised in Architectural Glass for my undergraduate course because I love working in response to place and space. Upon completion of my degree, I was offered a scholarship to undertake a Master of Design postgraduate, where I
focused on the sculptural glass making forms and casting in particular. Upon completion, I set up my glass studio on the outskirts of Edinburgh in 1998 and kitted it out with equipment which I sublet and rented out. All in all, about eight other artists used that studio as their springboard upon graduation. With space at a premium in Edinburgh, we moved to the Scottish Borders and a purpose-built studio was added to the back of the house. I no longer had so share my space, which was both a relief, but also missed the company and creative chat. I continued to work there on major public art projects across the UK: for the NHS, local authorities, museums, corporate clients such as BT, Pizza Express, Lloyds TSB, … And then the financial crash happened. And the bottom fell out of the market; many friends in architecture were made redundant, contractors lost their jobs, and the entire ecosystem of arts officers at local authorities and arts agencies, galleries…disappeared overnight and left a scene of devastation, from which I think it has not quite recovered. I continued to work on exhibition work but could no longer rely on commissioned work which had made my practice financially sustainable. The piecemeal and labour-intensive way of project work, where I took on the role of ‘orchestrator of things’ (or perhaps you might call it producer now?) such as the Reflections Residency and Exhibition programme for the Festival of Architecture 2016, as part of the Year of Innovation, Architecture and Design 2016 and the Mapping the Borders programme of cultural events as part of the UK-wide Being Human Festival in 2017, were supported through both Creative Scotland Awards and in-kind contributions from academic colleagues. I was lucky to be able to ride out some of the storm through a part-time job teaching at the University of Sunderland at the Artist Designer Maker course based at the National Glass Centre. This contact with students was critical to keep plugged in and feel inspired. I taught there for 13 years, commuting from the Scottish Borders to Sunderland, every week and left in 2019 to take up a full time post at Edinburgh Napier University as a Researcher for Creative Informatics, informed by a recently completed PhD at Northumbria University on ‘Mapping the Anthropocene: an investigation of Cultural Ecosystem Services through artists’ engagement with environmental change’, supported by a grant from the AHRC.

The overriding concept behind all work is sense of place. Works are often made in series; exploring a central theme through a body of work which may last a few years. Current work is the ‘Claude Glass’ series, exploring landscape through literature, such as William Wordsworth (Snowdon) (2016) and James Hogg (Ettrick Valley) (2019). Other series include ‘Creation’ (1997) which explored universal creation mythology, now in Dexia collection, Brussels, Belgium, or the Sanctuary series which explored forms of sanctuary such as ‘Nest’, 2004, Ebeltoft Glass Museum, Denmark). The Map-i project had been emerging following the Liverpool Map (2011) commission for the Museum of Liverpool (UK), as part of its City of Culture programme. The Map-i project has been developed as long-term investigation of space and place. It engages with mapping in art and the map as metaphor specifically by looking at the notion of space from a human perspective; from the infinitesimally small to the sublime of Space. Map-i is based on the premise of interconnectedness: how the observable universe can be broken down into infinitesimally small particles, applicable at both the micro and the macro level, always of course observed from a human point of view and referenced by the ‘i’ in Map-i. As part of Map-i, several projects have emerged, Mercator Revisited solo exhibition (“Compendium” purchased for Mercator Museum, Belgium, 2013), later exhibited at the British Glass Biennale 2015 and the subsequent Map-i: Blue Marble exhibition at the National Glass Centre in 2015, the Wordsworth and Basho: Walking Poets exhibition at the Wordsworth Museum in England in 2014, Kakimori Bunko in Japan (2016) and Working Perspectives at the John Buchan Museum in 2015.

My work has been described as work “where the lines are blurred, the crossovers and experiments where art and craft merge” (Duncan Macmillan: Scotsman: 19 February 2019), “stand-out work” (Keith Bruce: Scotsman: 26 December 2015), having a “fantastic stillness” (Homes and Interiors Scotland), "hauntingly beautiful" (Aberdeen Art Gallery), with a "meditative quality” (Crafts). “Her work combines high technical ability with a really creative approach. It is what everyone aims for but which is so hard to achieve.” (Glass in Scotland).

The current artists I admire are Lise Autogena and Joshua Portway, who bring poetic works to life through a data and tech savvy approach to make installations such as most Blue Sky or Foghorn Requim, which often has a social and environmental sensibility to it. I love the work of fellow maker Deidre for the very same reason. More established figures would be Mona Hatoum and Roni Horn for their multi-media approaches to sculpture, which – similar to Autogena and Portway - often embed social and environmental concerns. Olafur Eliasson for his passion for nature and use of space, using light and glass. Historical figures would include Agnes Martin for her contemplative work, Peter Greenaway for the rich lushness and depth of his work, Joseph Beuys for his radicalness, and – although not an artist in the traditional sense- Patrick Geddes, for all that he embodied (think global, act local) and his vision of the role of culture and art. All also have a passion for the materials they use.

A good day in the studio would be a day of ‘pottering’ and trying things, cutting and layering glass (the satisfaction of working with materials), of working things through by experimentation. Having the music on, with the door open so I can hear the birds sing too in the quieter moments. It would be a day when at the end of it, when you finally, reluctantly go back to the house because you are hungry or tired and realise hours have passed without you noticing…

The sounds in the studio are determined by the activity in the studio: if I am cutting glass, carrying out a plan, or making or doing something specific, then music, Radio 4 or an audiobook will do. If I am using noisy machinery, then often the music is loud too! If I am ‘thinking’, drawing and brain storming then only soft background music will do, garden sounds or silence. I need to ‘hear’ myself think!

At the moment not a lot. I am taking stock: having just finished a PhD, taken on a new, fairly intensive job, I can see that the studio will become more and more my go-to place to switch off and
work with tangible materials as opposed to digital words! Both have always been integral to my work as most projects are research intensive. I am currently working on some ideas around climate change as part of a working group I co-host with Marine Scotland and focussed on COP26. So, 2021 will be the focus for any new work for me.