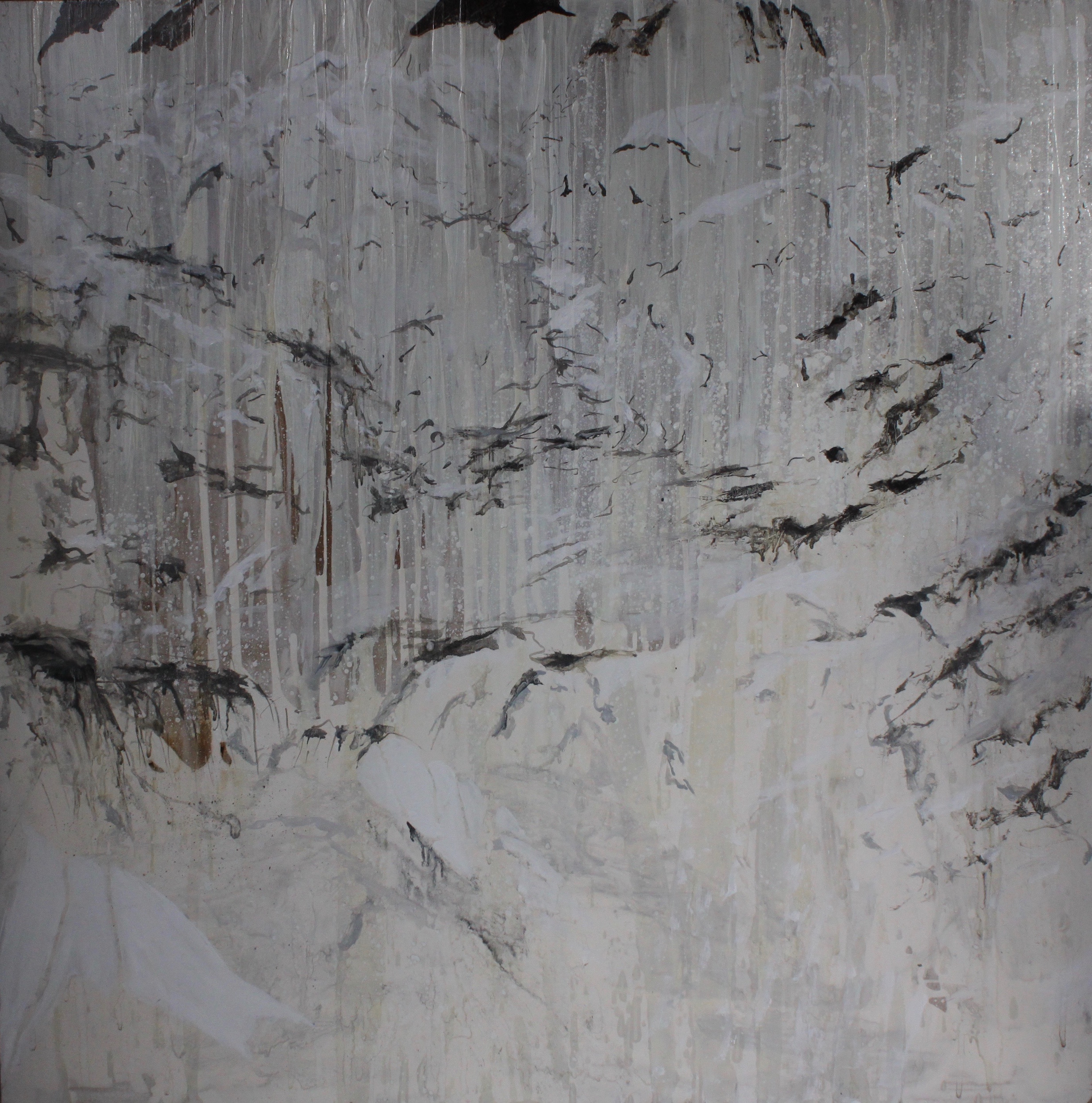 Amanda Airey has worked in the creative sector for over 20 years in a number of roles from bid writing, economic development and strategy. A fine art graduate, she continues her art practice focusing mainly on landscape and the natural world. She currently works at the Edinburgh Art Festival.

Amanda is currently one of Visual Arts Scotland's Vice Presidents.

"Since my early twenties, I have been fascinated by the Chinese and Japanese landscape drawing and painting tradition, and the notion that they did not always try to deliver an accurate representation but rather capture the essence of a place.  Whilst Oliver's paintings are firmly based in the mountains and landscapes of Scotland I feel something of the same sensibility.  They manage to combine a delicacy of touch that still conveys the enormous physicality of the landscape he is engaging with. There is a sense of frenetic activity but also space, presence as well as absence, which leaves the viewer with  tense. poetic works, clearly of nature, yet still hidden from us, still a mysterious, elemental force."

My work, directly or indirectly has always been related to the natural environment, such as space, time and memory, moving from one point of focus and concept to another, with a subsequent shift of process, approaches and medium; from creating conceptual site-specific installations to drawing and painting approaches, as it has been over the past 10 years. Yet, even within these traditional approaches and use of mediums, I will often investigate processes and techniques, such as exploring surface qualities; fusing oil paint and water-based materials together. My current work employs Lidar technology, a system for creating a digital 3D map of a space. I have currently been focusing on scanning sites around Scotland, such as The Lost Valley, which are then processed further using Photoshop, before developing in the studio. It is working in this way, employing digital technologies alongside those traditional approaches to explore geological and geomorphic features and characteristics of a location through space and time.

Tell us a little bit about your artistic background/education?

Having studies at Leeds and then Hull College of Art, I moved to Edinburgh to study for my MFA graduating in 1999 from ECA. I have been a practicing artist and an art educator throughout this period, working for Edinburgh College of Art and Open College of the Arts to co-establishing an Arts Centre in the Scottish Borders, Allanbank Arts. I have been on two Artist in Residence in different states of America and as well as solo and group shows have a site-specific work installed at the EICC, Edinburgh. I have been working for the University of Edinburgh over the past nine years and have recently taken up the post, Head of Arts within the Centre for Open Learning, delivering a range of Art, Design and Music courses.

My practice is an ongoing exploration in understanding and engaging with the natural environment. In recent years, I have been exploring how to translate a physical experience, such a mountain walk, back in the confines of the studio, at a different time, away from the event and space. As Alva Noë, states in his book, Action in Perception, “The world makes itself available to the perceiver through physical movement and interaction”. So observing an environment is not seeing it. The space needs to be explored and experienced through a symbiotic relationship between the objective and the subjective, the physical aspects and its perceptual and sensorial experience. We engage with a space through a combination of beliefs, emotions, senses, knowledge and time, through all of these perceptions and once back in the studio, I will develop works that combine aspects of those perceptions.

Art influences for me are fluid like the evolving practice, as the ideas, focus and direction change so too do the influences. I am currently inspired by a few of artists and works those of, David Bomberg (1890-1957) ‘In the Hold’ (1913/14) and ‘Ju-jitu’ (1913). 17 th C Chinese artist Shitao (1641-1718) and in particular a work entitled, ‘10,000 Ugly Inkblots’ (1685) and someone I have recently discovered is Jade Fadojutimi a 2017 graduate of the Royal College of Arts. The one aspect that brings these artists together for me is the way their works move your eye around the space, resting at times on an abstract form or shape or some suggested recognisable features, before marking your eye dart to some other element. The varying sizes of geometric shapes seen within Bromberg’s to those ink dots of Shitao, ‘10,000 Ugly Inkblots’ as a means to conveying relatives depths of space and therefore time, have echoes of the abstract cloud point maps I am currently exploring through making Lidar scans.

A good day in the studio is when you are focused and there is a natural fluidity and understanding as to the next steps. It can then be in these moments that something unexpected happens, and something new is introduced, such as a particular mark, shape, colour or result from a process, and this makes you reconsider the essence of what it is you are searching for and can give you the impetus and focus for the next piece, or series of works.

I never used to listen to music, I found it a distraction, silence was the order of the day, but now my musical choices echo those to which a piece of work is at. I often say to students, “…change your pace.” as this can allow for some dynamic counter-contradictions to appear within the work; in the early stages I’ll often work fast, physically engaging with the mediums and surface, to then slowing to a more considered pace, being analytical, methodical and reflective. So during the early stages of works I may listen to bands like The Clash, Talking Heads or Public Service Broadcasting, but then for those more considered and slower times of working, it may be music such as Brian Eno or Philip Glass.

I am currently developing a body of work, which employs the use of Lidar, exploring specific Scottish locations to study natural patterns within rock formations together with ideas based on Earth tides, the movement or rock through gravitational forces, with the hope of a solo show in the coming year or two, but aim to be able to show some works at the next VAS exhibition.